Youth Internet Monitor 2022 is out: Which social networks do young people in Austria use?

Every year, the Austrian Safer Internet Centre Saferinternet.at presents the current data on the use of different social media platforms by Austrian youth. Which social networks are currently the most popular among young boys and girls in Austria? The results are collected in the Youth Internet Monitor.

The most popular social networks of 2022

According to the Youth Internet Monitor, the six most popular social networking apps among Austrian young people in 2022 were the following: 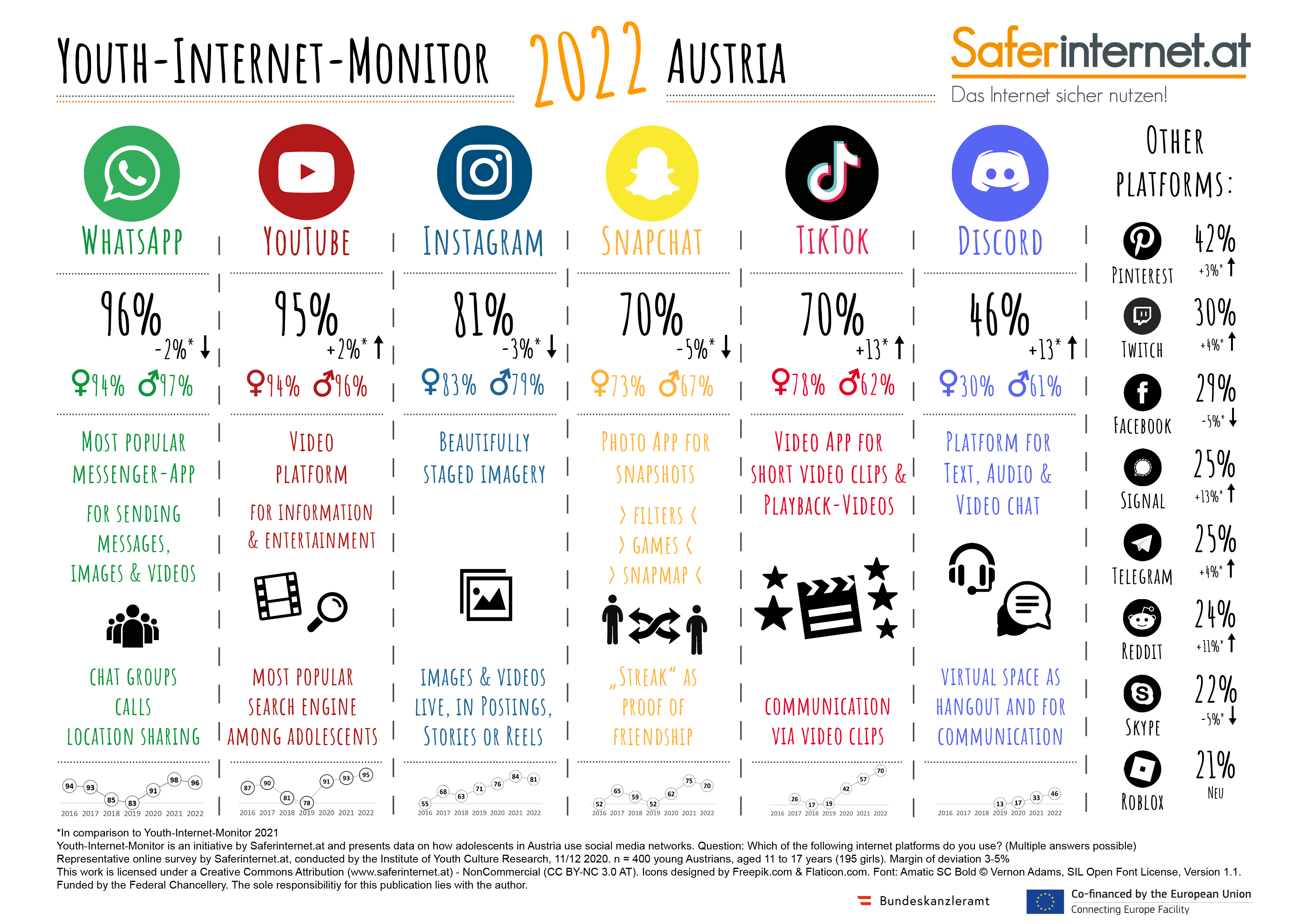 TikTok and Discord on the rise

With a slight decrease compared to 2021 (minus two per cent), the instant messaging app WhatsApp is once again the most popular social media platform among the Austrian users, followed by YouTube and Instagram. The other social media apps also confirm the trends observed in previous years as the most popular apps. In particular, Discord and TikTok have seen a remarkable increase in use among young people (13 per cent). TikTok gained more and more popularity, catching up with Snapchat and now sharing the fourth place with the photo-sharing app. In terms of regular use, TikTok is leading among video portals: 77 per cent of young people who use TikTok confirm they do so on a daily basis – which is more than the video app in second place, YouTube (64 per cent state they use it daily).

The chatting platform Discord (with an increase of 13 percentage points when compared to the previous year) made it into the top six social networks for the first time in 2022 and is particularly popular among younger users in Austria. 53 per cent of 11-to14-year-olds state they use Discord.

Online gaming platform Roblox was surveyed for the first time this year. The platform is increasingly being used as a social network, and particularly popular among 11-to-14-year-olds. 21 per cent of the surveyed stated using it regularly.

Which social networks do girls and boys use?

Although almost all the surveyed Austrian young people regularly use WhatsApp, other messenger services are also increasingly being used. Signal, for example, gained 13 percentage points in comparison with the previous year and is now at the same level as Telegram at 25 per cent. Both services are used equally by all age groups. Other instant messaging apps in use include Snapchat (70 per cent), Facebook Messenger (27 per cent), iMessage (18 per cent), Viber (14 per cent) and Kik Messenger (six per cent).

A representative online survey was conducted by the Institute for Youth Culture Research for the Youth Internet Monitor 2022. For this purpose, 400 young people aged 11 to 17 were surveyed in December 2021 about their use of social networks. More information about the survey can be found at www.jugendinternetmonitor.at.

Download the infographic (pdf) of the 2022 Youth Internet Monitor for a summary of the results of the survey.

For comparison purposes, you can read the summary of the 2021 Youth Internet Monitor here.

Digital Youth Forum 2022 will be available in Ukrainian

The Digital Youth Forum (DYF) is an event designed for youth, by youth, and about youth on creative and innovative uses of new technologies and online safety. Organised by the Empowering Children Foundation as part of the Polish Safer Internet Centre, it’s a meeting of experts and inspiration seekers, creators and consumers, activists and dreamers.

The new Better Internet for Kids strategy is out! Introducing BIK+

Today, the European Commission has adopted a new European strategy for a Better Internet for Kids (BIK+), with the aim to improve age-appropriate digital services and to ensure that every child is protected, empowered and respected online. This new strategy comes ten years after the first BIK strategy, and during the European Year of Youth, spotlighting the voices and ideas of young people themselves.