A new study on online behaviour and the challenges faced by Austrian children and youth on social networks shows a competent use and a conscious online presence.

Today, social media is primarily used to keep in contact with friends, to search for information, and to be entertained. Posting content has become less important – only about a third of young people post images of themselves online. And, if they do, they use messaging apps with personal accounts, or in other private online spaces. Additionally, stories and user-generated content which automatically disappears after 24 hours has become more relevant than in the past. 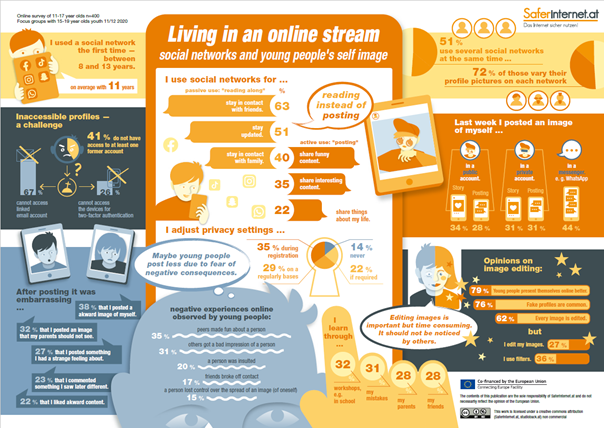 Results of the study on online behaviour and challenges of Austrian young people.
Credit: Saferinternet.at

Nearly half of children and youth in Austria have at least one profile in a social network that they are not able to access anymore. The most common reasons for this might be that the linked email address is not available anymore, or that the two-factor authentication is hindering the login process since the associated device is lost or broken.

Social networks today (such as Facebook) have longer lifespans than platforms of the past (such as Netlog). Thus, inaccessible accounts can potentially be troublesome. For example, reported cases show that long-forgotten accounts often contain images considered as embarrassing or inconvenient. In this context, young people claim that their right to be forgotten is not being implemented. Social network providers need to develop ways to ensure that this right is granted, for example by automatically deleting inactive accounts after giving out warnings.

In the study, 79 per cent of respondents agreed with the statement “All young people present themselves better on social media than they do in reality”. Indeed, 62 per cent think that all pictures found online are edited. Still, when asked whether they edit images themselves, only 27 per cent admitted doing so. Young people face a dilemma: online images must look both professional and effortless at the same time else they will otherwise be considered as “cringe” (embarrassing or uncomfortable). This might also explain why children and young people are posting fewer pictures of themselves nowadays. It could also relate to their fear of unwanted negative responses to shared content online, such as hate speech, mobbing or cyberbullying.

Most young people in Austria claim to manage their privacy settings on social networks, and only a small minority admits to having never done so. Children and youth do seem to care about their online presence, and they think before they post. A new generation of users is growing up.

The survey “Living in an online stream: social networks and self-presentation” was carried out by the Institute for Youth Culture on behalf of the Austrian Safer Internet Centre and ISPA – Internet Service Providers Austria. The respondents (n=400) were 11 to 17 years old – the study is representative for this age group in Austria. In addition to the study, the results were contextualised within three focus groups and experiences from workshops organised by the Austrian Safer Internet Centre.

The Austrian Safer Internet Centre @saferinternetat has conducted a study on online behaviour and the challenges faced by Austrian children and youth on social networks. It shows a competent use and a conscious online presence, as well as a reflection on the “right to be forgotten” online.

You can read more about it on the Better Internet for Kids (BIK) portal at https://www.betterinternetforkids.eu/

@saferinternetat has conducted a study on online behaviour and the challenges faced by Austrian children and youth on social networks. It shows a competent use and a conscious online presence.

You can learn more at https://www.saferinternet.at/

The BIK Youth Panel 2021 contributes to the #DigitalDecade4YOUth!

After a series of online meetings, members of the 2021 BIK Youth Panel are preparing to showcase their work during the pre-event session of the Safer Internet Forum (SIF) 2021, taking place on the eve of the main event.

The BIK Youth Panel 2021 is kicking off tonight!

The 13th edition of the Better Internet for Kids (BIK) Youth Panel is approaching and will culminate with an online session at Safer Internet Forum (SIF) 2021.