How can young people deal with cyberbullying when they themselves are affected? Where can they turn to if they do not want to confide in their families or teachers directly? In order to support young people in dealing with cyberbullying, members of the klicksafe Youth Panel have developed the Cyberbullying First Aid App in 2016. The German Awareness Centre klicksafe is publishing the app and the corresponding klicksafe flyer Was tun bei Cyber-Mobbing? ("What to do about cyberbullying?") in a new design and with new content.

In the 2019 JIM study, one in five adolescents stated that false or insulting content about themselves had already been disseminated online at some point. One third of young people are also aware of cases of cyberbullying among their friends. Bullying on the internet can become a serious burden for young people. Often those affected do not manage to free themselves from such a psychologically stressful situation without help. For this reason, members of the klicksafe Youth Panel developed an app in 2016 that is designed to help those affected, but also to empower bystanders to counteract cyberbullying: the Cyber-Bullying First-Aid App.

In short video clips, the two media scouts, Emilia and Tom, give concrete tips for adolescents being bullied, encourage them and accompany them in their first steps against it. In addition to legal background information and links to advice centres, young people can also find tutorials on how to report, block or delete offensive comments on social media platforms. 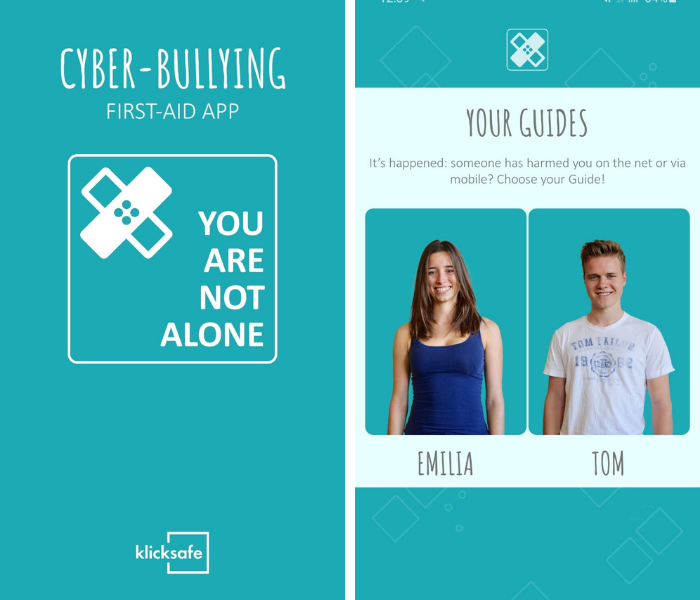 The Cyber-Bullying First-Aid App has been expanded with tutorials and appears in a new design for Android and iOS. The app is available in the most popular app stores initially in German and English. The app will be available in Luxembourgish, French, Lithuanian and Slovenian from October 2020.

More information about the app and about cyberbullying is available on the klicksafe website (in German).